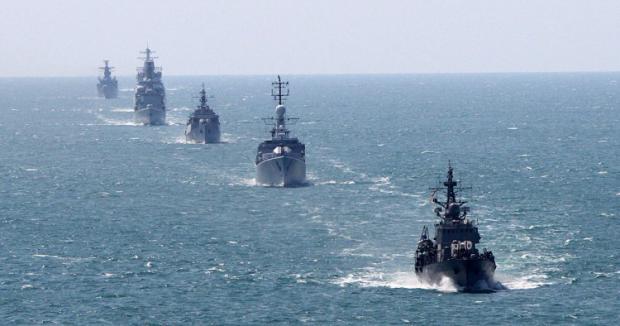 Welcome to the latest NATO show: Sea Breeze starts today and goes all the way to July 23. The co-hosts are the US Sixth Fleet and the Ukrainian Navy. The main protagonist is Standing NATO Maritime Group 2.

The show, in NATOspeak, is just an innocent display of "strenghtening deterrence and defense". NATO spin tells us the exercise is "growing in popularity" and now features more than 30 nations "from six continents" deploying 5,000 troops, 32 ships, 40 aircraft and "18 special operations and dive teams". All committed to implement and improve that magical NATO concept: "interoperability".

Now let's clear the fog and get to the heart of the matter. NATO is projecting the impression that it's taking over selected stretches of the Black Sea in the name of "peace". NATO's supreme articles of faith, reiterated in its latest summit, are "Russia's illegal annexation of Crimea" and "support for Ukraine sovereignty".

So for NATO, Russia is an enemy of "peace". Everything else is hybrid war fog.

NATO not only "does not and will not recognize Russia's illegal and illegitimate annexation of Crimea" but also denounces its "temporary occupation". This script, redacted in Washington, is recited by Kiev and virtually the whole EU.

NATO bills itself as committed to "transatlantic unity". Geography tells us the Black Sea has not been annexed to the Atlantic. But that's no impediment for NATO's goodwill – which the record shows turned Libya, in northern Africa, into a wasteland run by militias. As for the intersection of Central and South Asia, NATO's collective behind was unceremoniously kicked by a bunch of ragged Pashtuns with counterfeit Kalashnikovs.