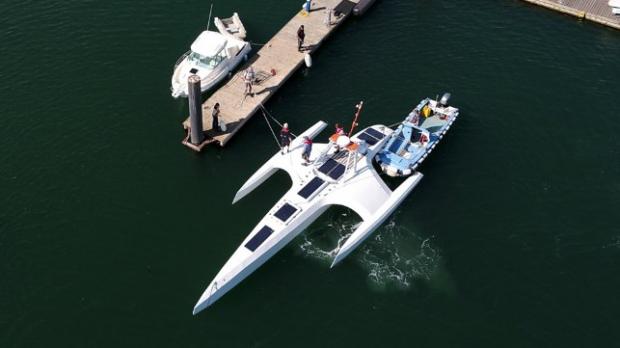 An autonomous version of the historical Mayflower ship that's powered by artificial intelligence (AI) is set to make is maiden voyage across the Atlantic next month.

On April 19, Mayflower Autonomous Ship (MAS) will depart from Plymouth, England and arrive at Plymouth, Massachusetts about 3,000 miles and two weeks later.

The original ship, which transported 102 passengers known as the Pilgrims, took 10 weeks to reach its destination in the autumn of 1620.

The new 50-foot ship, which won't carry any human passengers or even crew, will roughly take the same route as its predecessor.

When they set sail from Plymouth, England, on September 16, 1620, the Pilgrims were escaping religious persecution and sought to establish a settlement in the New World.

Just over 400 years later, the MAS will gather critical scientific data about the ocean', powered by AI and solar energy.

MAS was first revealed in 2017 and was supposed to sail last September to mark the anniversary before plans were delayed due to coronavirus.

It's been made in partnership with University of Plymouth, autonomous craft specialists MSubs, tech firm IBM and public charity Promare which promotes marine research and exploration throughout the world.

'The single biggest challenge is the ocean itself,' said Brett Phaneuf, co-founder of ProMare.

'No ship has ever been built that can survive whatever the ocean could throw at it.'

With no human captain or onboard crew, MAS uses AI and automation to traverse the ocean in its quest for data and discovery.

Built in Poland to ProMare's specifications, the 5-ton, 50-foot-long vessel incorporates many advanced marine architecture features, all designed to withstand the stresses of extended trips at sea.

Walmart is investing in self-driving development with Cruise