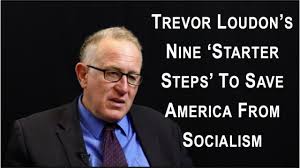 A New Zealander's Nine 'Starter Steps' To Save America From Socialism

Though I'm a New Zealander, I know America and its people well. I've traveled to every state in the Lower 48 and have addressed more than 500 audiences across this amazing nation. My message has always been the same: The United States is heading toward a brutally tyrannical socialist revolution—and if America goes down, every free country follows.

Well, now it's here, people, unfolding before our very eyes.

So, what can be done? Can the Republic be saved? Honestly, I don't know.
However, I can suggest some steps that would at least give this country a fighting chance.

Millions of Americans are still in complete denial. Many think the military is secretly in control—that it's only a matter of time until justice is done and President Donald Trump is restored. There's a "secret plan"—just "have faith." The truth is that Trump was outmaneuvered by an alliance of communists, globalists, and even traitors in his own party. The "deep state" is now almost fully in control.

Trump isn't coming back into office any time before 2024—if we still have meaningful elections by then.

To make sure they can never be voted out of office, the Democrats plan to enfranchise 22 million illegal immigrants, abolish the electoral college, gain at least four more far-left senators through Puerto Rican and D.C. statehood, and flood the country with tens of millions more third-world refugees and illegal immigrants. They also plan to nationally introduce voting "reforms," i.e., mass mail-in balloting, the abolition of ID requirements, etc. that will guarantee eternal Democratic Party control.

If the Democrats can abolish the Senate filibuster and place at least four more leftist "Justices" on the Supreme Court, there'll be virtually no way to stop any of this if we rely on traditional political methods.

POINT OF NO RETURN

The Best Weather App for RV Travel in 2021

Is the Dollar Going to Die? (with Peter Schiff)

When You Take Coffee TOO Seriously!

Why Will The New SpaceX Lunar StarshipTake Astronauts To The Moon?

Top Brass Is Preparing For The WORST!