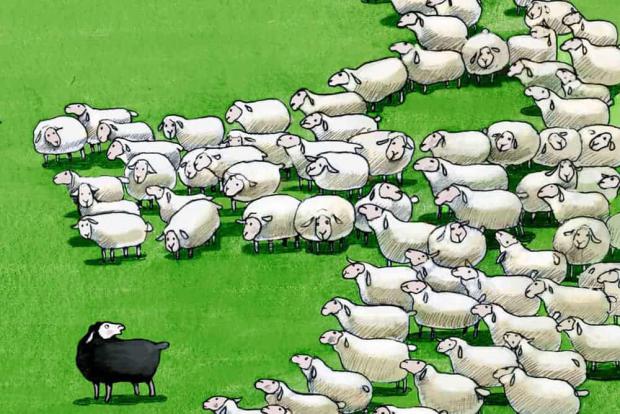 If it seems like the world has turned upside down it's because it has. Right is wrong and wrong is right. Truth is lies and lies are truth. Knowledge is ignorance and ignorance is knowledge. Success is failure and failure is success. Reality is illusion and illusion is reality.

It would be comforting to say that this inversion is a plot by nefarious others. Comforting, but not true, in the pre-inversion meaning of the word true. Rather it stems from answers to questions that confront everyone. To think for yourself or believe with the group? To stand alone or cower with the crowd? It's the conflict between the individual and the collective, and between what's true and what's believed.

We live in an age of fear. It's not fear of germs, war, poverty or any other tangible threat that most besets humanity. It's the fear of being disliked and ostracized by the group.

If every age has its emblematic technology, ours is social media, with its cloying likes and thumbs up and its vicious cancellations, doxing, and deplatforming. No longer must you wander through life plagued by that nagging insecurity—am I liked? Now you can keep virtual score: you not only know if you're liked or disliked, you know how much and by whom. Unfortunately, that knowledge doesn't seem to help; the scoreboards only amplify the insecurity. What was once an occasionally troubling question, privately asked of one's self, has become a widely held, public obsession.

The official Covid-19 response is the apotheosis of inversion and probably the one that runs it off the rails. There's a model that has repeatedly erred predicting infection and death rates by orders of magnitude. Use it! Politicians and bureaucrats, the two most power-hungry groups on the planet, are clamoring for unlimited powers to destroy jobs, businesses, economies, lives, and liberty. Give it to 'em, no questions asked! Sunshine, Vitamin D, fresh air, and exercise prevent diseases and lessen their symptoms' severity. Lock 'em up! Lockdowns aren't working.