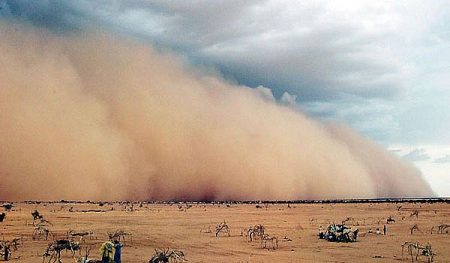 Further scientists say the ominous sounding 'radioactive Saharan dust' is causing a pollution spike even over parts of Southern Europe.

The Association for Control of Radioactivity in the West (Acro) reported that scientists have observed the phenomenon happening since February when the dust was found to be over parts of France. Samples confirmed what was found to be radioactive particles in the dust which had been kicked up by a major storm that recently swept Morocco, creating huge dust clouds that picked up the radioactive material that had been left over from past nuclear tests conducted by France on its then colonial possession of Algeria in the early 1960s.

While some scientists have claimed it's "not dangerous" - others have cautioned that residues of Caesium 137 - a radioactive isotope - may require cautions like staying indoors.

Citing the French NGO which monitors Europe for signs of nuclear contamination, Euronews reported this week that "Acro said it did tests on recent Saharan dust that it collected in the area of Jura, near the French border with Switzerland."

"Considering homogeneous deposits in a wide area, based on this analytical result, Acro estimates there was 80,000 bq per km2 of caesium-137," the organization said in a statement.

While the health effects to exposure could be negligible in the short-term, we doubt too many Europeans are comfortable with such a threatening cloud of particles hovering over the continent.