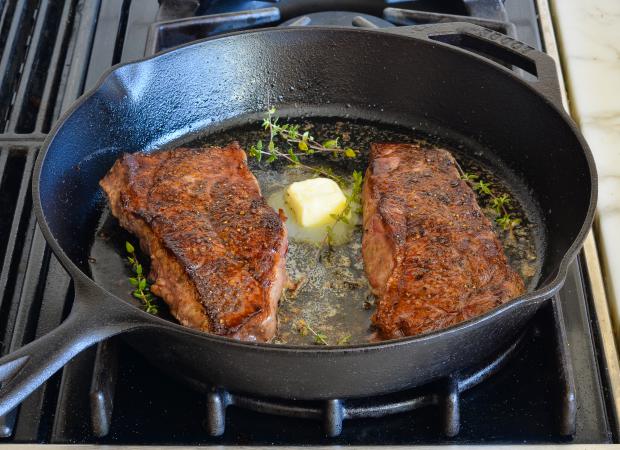 A meat-lover has revealed the perfect way to cook a steak - and the secret is to cook it low and slow in the oven before browning the edges in a pan.

The home cook, Mike Elender, who posts on TikTok as MeatlikeMike, places a piece of steak in an oven-proof dish, adds a handful of garlic cloves and  two sprigs of rosemary before covering it with oil.

He then puts it in the oven at about 100C for 45 minutes, or until it reaches an internal temperature of 50C.

The American then pulls the steak out of the oven, sears it in a pan for 30 seconds each side, and also on the fat on the side.

'You will get an amazing crust out of this,' he said.

He then cuts the steak into strips, showing off the pink centre and adds a sprinkle of salt.

His face melts as he takes a bite of the delicious-looking piece of meat - and others appeared to be on board with the low and slow method because the video got over 3.5million views.

Thousands of meat-lovers commented on the educational video, expressing their delight in the finished meal.

'This looks amazing, I am trying it,' one person said.

But some people weren't impressed with the dish and said it was 'under cooked'.

How much land do you need to grow all your produce?