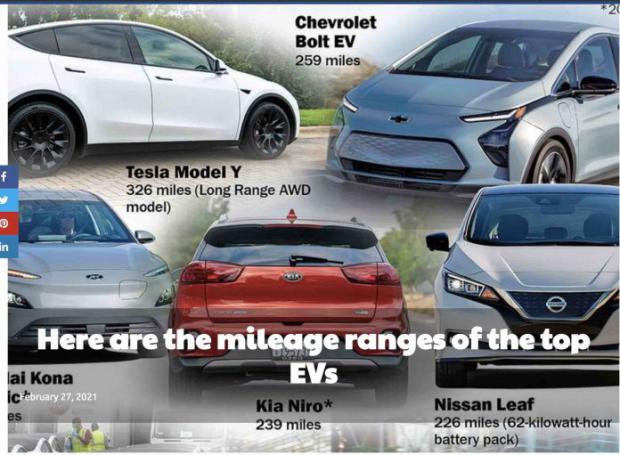 They are very misleading numbers. The first reason being that the way the number is arrived at by what the EPA styles the Multi-Cycle City/Highway Test Procedure – which does not reflect the way most people drive a car in the the real world.

Because to begin with the car isn't actually driven at all.

The test is performed on a chassis dynamometer that simulates driving. Mostly low-speed, low-load and stop-and-go driving, which just happens to be the type of driving that electric cars (and partial-electric hybrid cars) are best-suited for in terms of range, even though this is almost by definition not very far.

Their range declines when they are operated on the highway, especially for extended periods of time – because you can't keep moving without using energy whereas it takes almost no energy to remain stationary and very little energy to creep forward and intermittently at "city" speeds.

Non-electric cars, it's worth pointing out, go farther on the highway – at high speeds – than they do put-putting along at "city" speeds.

In addition, the testing is done inside – in a room that isn't freezing cold or steamy hot, two real-world realities that significantly affect the range of electric cars because of the increased load on electrically powered accessories such as the heater (a no-cost accessory, in terms of gas mileage or range in a non-electric car) and the air conditioner as well as the energy expended keeping the battery warm – and cool – as the real-world temperature swings to extremes.

The EPA  tacitly concedes its EV testing protocols are disingenuous by "adjusting" the range numbers it promulgates via mathematical legerdemain which is very opaque and so very suspicious.