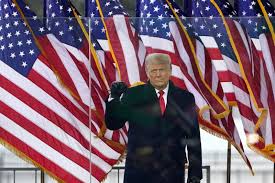 'We're not starting new parties,' he said, dispelling weeks of rumors. 'We have the Republican Party'

'Wouldn't that be brilliant?' he quipped. 'Let's start a new party, let's divide our vote, so you can never win'

'Who knows, I may even decide to beat them for a third time,' Trump said, calling Melania 'future first lady'

He spoke out against 'cancel culture', vowing to 'stand up to political correctness and reject left-wing lunacy'

The 74-year-old called for a purge of his enemies from the Republican Party, singling out Liz Cheney

Getting vaccinated for COVID-19 means that a person will become a GMO zombie,--

The Grim Reaper Uses a Stealth Vitamin B1 Deficiency (Beriberi), Hidden Behind the Covid-19..

The Derek Chauvin Trial Was a Travesty, Prosecutors Violated Rules That Protect Us All

Thanks, Derek Chauvin Jurors! You're Safe Now. We Aren't.