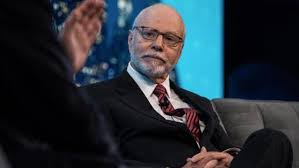 In 2012 Elliott Management's Paul Singer correctly warned that financial system leverage and technology would "serve as an accelerant in the next crisis":

"The major message that I want to give you (and I've invited challenge on both parts of my thesis here and I've never had anybody challenge it): The major financial institutions in the US and around the globe are utterly opaque; and The next financial crisis will happen faster, more suddenly."

In 2014, Singer went more aggressively after the central banks and their arrogant largesse:

"There is no reason to suppose that they [central bankers] understand the modern financial system and economy to any greater extent than they did in 2007 (that is to say, not at all). Nevertheless, they plow ahead, expressing total confidence that what they are saying and doing is wise and not dangerous drivel."

"It is unlikely that these unprecedented and experimental government policies of such gargantuan scope will actually create the desired result and allow themselves to be able to be unwound without great shock and disruption to the global financial system."

His solution at the time:

Einhorn: "The Market Is Fractured And In The Process Of Breaking Completely"