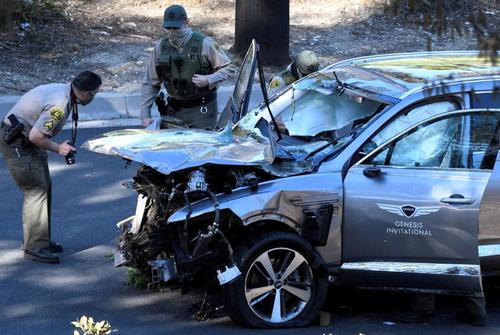 Tiger Woods, the greatest golfer of his generation, is recovering from a lengthy surgery after he sustained multiple open fractures to his leg and ankle during a single-car accident Tuesday morning. Woods' car reportedly rolled over several times, and required a rescue team equipped with special tools to rescue the trapped and badly injured athlete.

While Woods' injuries are said to be non-life-threatening, at the time of the accident, he was recovering from back surgery which he had just the week before. With Woods' career in jeopardy, the chief medical officer and interim chief executive at Harbor-UCLA Medical Center detailed the extent of the injuries, saying that a rod, pins and screws were needed to stabilize Woods's injuries.

"Comminuted open fractures affecting both the upper and lower portions of the tibia and fibula bones were stabilized by inserting a rod into the tibia," Anish Mahajan said in a statement released early Wednesday by Woods's representatives.

"Additional injuries to the bones of the foot and ankle were stabilized with a combination of screws and pins. Trauma to the muscle and soft-tissue of the leg required surgical release of the covering of the muscles to relieve pressure due to swelling."

For those who aren't up on their medical terminology, a comminuted open fracture is one in which a bone breaks in more than one place and breaks through the skin.

Woods's team added that the golfer is "awake, responsive and recovering in his hospital room" after what was described as a "long" surgery, and thanked everyone for their "overwhelming support and messages during this tough time."

Meanwhile, as far as what might have caused the crash, one TV director reportedly told coworkers that he nearly crashed into an "agitated and impatient" Woods hours before the accident. The director of the TV show "Grown-ish" recounted the near-miss to his crew even before news of the golfing legend's horrifying crash first broke. Woods crashed in a residential area in a spot where many accidents have occurred, and video obtained by TMZ shows Woods driving his Genesis GV80 SUV just moments before the crash.