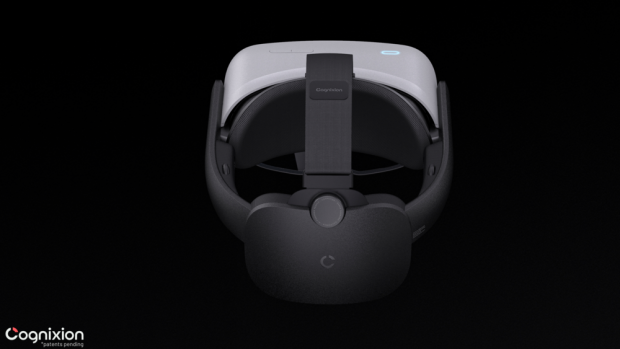 While the AR headset is aimed primarily at users with conditions such as cerebral palsy or amyotrophic lateral sclerosis (ALS) – anyone who already uses eye control or a BCI to help them communicate – the technology is going on sale to anyone who wants to try it.

In the works since 2017, the Cognixion ONE has been developed by a team of neurologists, biosignal engineers, speech-language pathologists and other experts to best cater to the needs of people with communication disorders. Besides the BCI, the headset can be controlled via head movements, voice commands, and a switch control too.

The headset works along similar lines to existing brain computer interface technology: while these systems aren't smart enough to work out exactly where someone is thinking, they can identify brain activities related to looking and pointing. That's enough to select items on a menu or to point towards letters on a keyboard.

Brain communication is handled by six non-invasive electrodes, with no head shaving or special gels required – put the headset on, and it just works. The device is able to adapt to any brain and any head shape, according to the development team, with machine learning algorithms deployed to optimize the speed of the BCI.

The unit is fully self-contained, so it can work without being hooked up to a computer or a power source. There's even built in 4G LTE connectivity, so the device is able to stay online even beyond the reach of Wi-Fi. The team is also promising an integrated AI assistant for functions such as smart home control.

We haven't seen too many details of what exactly the Cognixion ONE can do yet, but from the materials that have been released so far, it looks as though the usual AR applications are on the table – applications covering movies, music, games, communication and remote control of a computer. Expect digital graphics like keyboards and menus that can be overlaid on top of the physical world.