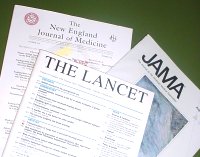 In the same year, Marcia Angell, former editor of the New England Journal of Medicine, lambasted the industry for becoming "primarily a marketing machine" and co-opting "every institution that might stand in its way" [2]. Medical journals were conspicuously absent from her list of co-opted institutions, but she and Horton are not the only editors who have become increasingly queasy about the power and influence of the industry. Jerry Kassirer, another former editor of the New England Journal of Medicine, argues that the industry has deflected the moral compasses of many physicians [3], and the editors of PLoS Medicine have declared that they will not become "part of the cycle of dependency…between journals and the pharmaceutical industry" [4]. Something is clearly up.

The Problem: Less to Do with Advertising, More to Do with Sponsored Trials

The most conspicuous example of medical journals' dependence on the pharmaceutical industry is the substantial income from advertising, but this is, I suggest, the least corrupting form of dependence. The advertisements may often be misleading [5,6] and the profits worth millions, but the advertisements are there for all to see and criticise. Doctors may not be as uninfluenced by the advertisements as they would like to believe, but in every sphere, the public is used to discounting the claims of advertisers.

If Lockdowns Are Needed, Why Did More People Die In States That Locked Down Than Those That Didn