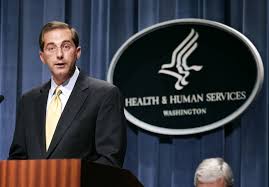 Best joined HHS in March. Two months ago, Best delivered a speech outlining ways to lower costs, make it easier for generics and biosimilar drugs to enter the market, and rethinking drug rebate programs that serve to drive up prices.

Call me overly suspicious but the circumstances surrounding Best's death, and the coroner's official cause raise red flags for this intrepid reporter. Especially when looking for a motive for his "suicide."

On Thursday, Washington D.C.'s Office of the Chief Medical Examiner said Best died from "multiple blunt force injuries" and ruled his death a suicide. No further information was released.

Maybe I'm channeling Danny Reagan, but the cause of death just isn't consistent with suicide. People just don't beat themselves to death.

Then there's the fact Best probably would've poisoned himself using his vast knowledge of, and ready access to, lethal drugs.

There's also no mention of marital difficulties or other life-challenging events that may signal depression.

18 Reasons I Won't Be Getting a COVID Vaccine

Officer In Ashli Babbitt's Death Will NOT Be Charged, Highlighting STUNNING Hypocrisy

The Media Lied Repeatedly About Officer Brian Sicknick's Death. And They Just Got Caught