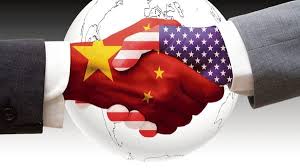 Thus did President Nixon, in the Shanghai Communiqué of 1972, accept China's territorial claim to the island of Taiwan.

In 1979, Jimmy Carter severed relations with Taiwan, recognized Beijing as the legitimate government and dissolved the U.S. mutual security treaty with the Republic of China on Taiwan.

We ceased to be obligated to go to war to defend Taiwan.

Observing US arms sales to Taiwan and visits by US officials, China is issuing us a reminder: "You Americans are encouraging those on the island who seek independence. Not going to happen. Rather than let Taiwan go, we will fight. Taiwan is a part of China and is a red line for us."

Beijing is said to be seeking a face-to-face meeting with Biden.

Great Reset: Biden Hikes Cost Of Carbon Emissions By Over 600%