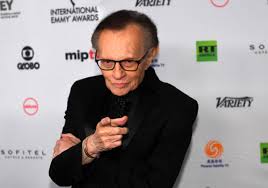 His production company, Ora Media, confirmed his death in a statement on social media Saturday

No cause of death was given, however, it comes weeks after King was hospitalized with coronavirus

He was reportedly transferred out of the intensive care unit on January 4, but had remained in hospital

King conducted over 50,000 high-profile interviews with presidents, world leaders, Hollywood royalty and sports stars during the course of his 65-year-long career as a TV and radio host

The legendary host suffered a massive career setback in 1971 when he was arrested on charges of grand larceny, it was revenge from a former friend for not agreeing to bribe President Nixon on his behalf

King has been married eight times to seven different women; he married his most recent wife Shaun Southwick while he was hospitalized undergoing heart surgery in 1997 - they separated in 2019

He recently mourned the loss of two of his adult children in August 2020, who died from different diseases within one week of each other