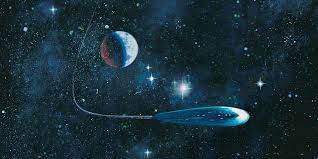 If you could fly two billion miles in the direction of the Pegasus constellation, and knew where to look, you would find a thin, flat object, about the size of a football field and up to ten times more reflective than the average comet. If you watched it for a while, you would notice that it is tumbling as it moves away from the sun, turning end over end roughly every seven hours.

This object passed the Earth in October 2017. As it began its return to interstellar space, the Canadian astronomer Robert Weryk identified it among the images from what was then the world's most powerful camera, a telescope in Hawaii called Pan-STARRS1. The astronomers in Hawaii called it 'Oumuamua, a Hawaiian word meaning "first scout from a distant place".

'Oumuamua was the subject of great excitement. It was the first object humans have observed travelling through the solar system from interstellar space. But it also became controversial: its shape, the way in which it approached us, and the way it moved away are not consistent with the behaviour of an asteroid or comet. For 11 days, the world's telescopes searched for meaning from this strange visitor.

A once in a blue moon shot! Astrophotographer captures stunning photo...