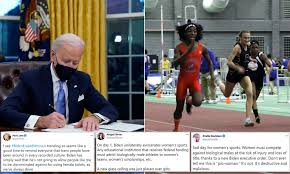 The order was slammed by some critics who say it will disadvantage cis girls; they accused Biden of 'erasing women' and imposing 'a new glass ceiling'

But many LGBT rights activists hailed the executive order, arguing that Biden is making good on his promise to create a more unified and inclusive country

In March 2020, Idaho became the nation's first to prohibit transgender students who identify as female from playing on female teams at public schools

Biden Admin Wastes No Time Starting New Wars in Middle East and Beyond after Syria Strike...

A Plea to the Left: Joe Biden Will Not Save You