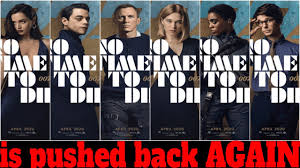 A new date of October 8, 2021 has been announced for No Time To Die's release

When the film was pushed back in October, Craig defended producers decision to delay saying 'this thing is just bigger than all of us'

James Bond's No Time To Die has been delayed again, meaning fans will have to wait another six months to see the latest movie in the spy franchise.

A new date for the movie was shared on the film's official Twitter account on Thursday, revealing the latest expected date is October 8, 2021.

The movie was previously slated to be released on April 2 after already being hit by several changes due to the coronavirus pandemic.

The film, directed by Cary Joji Fukunaga, was originally scheduled for release in April 2020, but was pushed back to November before the release was changed once again to April 2021 in light of the coronavirus pandemic.