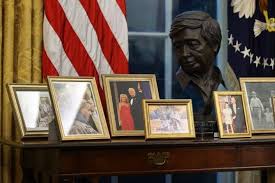 Biden, like President Barack Obama before him, removed a bust of the legendary British Prime Minister Winston Churchill from the Oval Office, a symbol of the special relationship between the United States and Great Britain.

He placed the Chavez bust on the table behind his desk, among portraits of his family members, where it will be seen by anyone meeting with him and will be captured by photographers' lenses or television cameras in national TV addresses.

Yet Biden has little known association with Chavez. The civil rights leader, who is a prominent hero among many Latinos, is not mentioned once in Biden's 2007 political memoir, Promises to Keep, which recounted his Senate career to that point.

Chavez is among several American leaders Biden has chosen to display in the Oval Office, including a bust of Martin Luther King, a massive portrait of Franklin Roosevelt, a painting of Benjamin Franklin and others.

Garcia said she'd like to meet the president and ask him why he chose to honor Chavez. Though she didn't get a chance to know him, Garcia met Chavez as a child. She said she remembers the positive energy her great-uncle gave off, and the legacy he left with his family has also left a lasting imprint in her life.

'You can't make this stuff up':