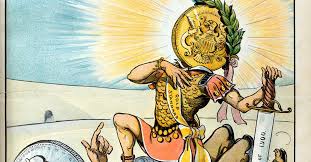 This value did not return when private ownership of gold was legalized once more in 1974, partly because its use is still discouraged by anti-usury laws.

The impact of its sudden absence was dramatized by a letter dated February 4, 1964, from the libertarian newspaper magnate R.C. Hoiles to Robert LeFevre. Hoiles explained that as a result of "the government abrogation of contract … I lost $240,000." The contracts to which Hoiles referred were gold clause ones by which he sold two newspapers, with full payment due in 1935. The abrogation was House Joint Resolution 192 or the "Gold Clause Ban" of 1933, and the Gold Reserve Act of 1934, which annulled the clauses. (Adjusted for inflation, $240,000 in 1934 is equal to more than $4.5 million today.) Hoiles was a victim of Roosevelt's war on private gold, which led to the erasure of an estimated 40 percent of public and private debt from 1933 to 1935 owing to the erasure of the gold clauses still in force. The debtors, especially government, benefited; creditors lost.

A gold clause is a provision that stipulates that a contractual obligation should be paid in a specific amount of gold or in its paper equivalent. The clauses were ubiquitous in America during the late nineteenth and early twentieth centuries. The 1934 essay "Some Aspects of the Nullification of Gold Clauses in Obligations," published in the University of Chicago Law Review, stated, "It has been estimated that, of the $200,000,000,000 public and private debt, approximately one half contains a gold clause in one form or other."

Peter Schiff: Anybody Betting Against Gold Is Going To Lose