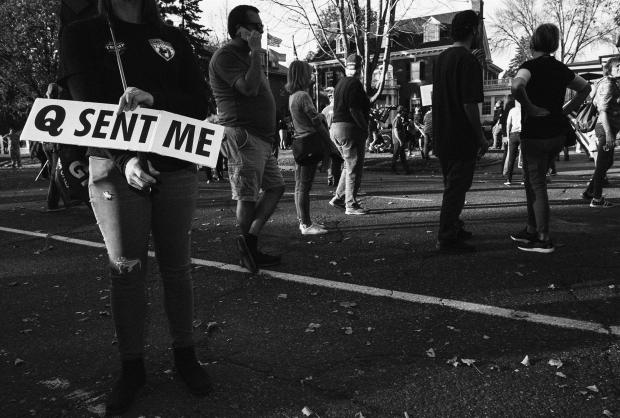 Liesa Norris got a panicked phone call Monday from her brother. He told her to buy a ham radio.

The radio, he explained, would be one of the few ways they could communicate once President Donald Trump launched his plans to take permanent power.

"We were dancing around the subject, and then he just brought up that on the 20th, you know, the truth is going to come out," Norris said. "He was just going on and on about how we needed to have ham radios because we're not going to be able to talk on regular phones and everything is going to be dark."

Trump has no such plans. But in the fractured QAnon community, which has turned to a variety of smaller messaging apps and YouTube to keep spreading conspiracy theories, evidence-free reports of a nationwide blackout and impending martial law Wednesday have become a last stand for true believers that Trump will be president after Inauguration Day.

NBC News reviewed the social media accounts of Norris' brother, part of a sea of QAnon accounts that have become increasingly divorced from reality since the Capitol riot. Most of the accounts have expressed a belief that Trump will declare martial law and execute Democrats on Inauguration Day as part of the cult's long-awaited doomsday.

Family's Farm Raided, Animals Killed -- For Rehabilitating Them Without A Permit

Can We Forge a New Era of Humanity -- Before It's Too Late?

Numb - A Short Film: About Deadly Lockdowns & Closed Schools, by a 9th Grader