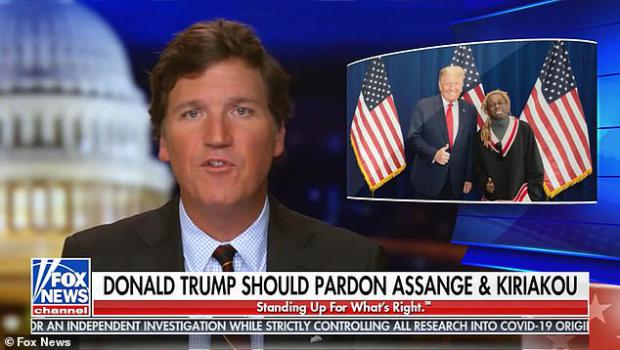 Among them are reportedly rapper Lil Wayne and a Medicare fraudster from Fla.

Anderson described the WikiLeaks founder as a 'hero of free speech'

Donald Trump has been urged not to 'degrade himself' and his voters with a slew of dubious pardons as he leaves the White House, as Pamela Anderson pleaded for her friend Julian Assange to be granted a reprieve.

The president is expected on Tuesday to issue up to 100 pardons for people including white collar criminals, rappers and friends.

The White House held a meeting on Sunday to finalize the list of pardons, two sources told CNN: Trump and his family are not believed to be on the list.

Yet on the eve of the pardons, Tucker Carlson, the Fox News host who the president reliably tuned in to, urged him not to grant the full list of the rumored recipients - among them rapper Lil Wayne, who pleaded guilty to gun charges, and Dr Salomon Melgen, a prominent eye doctor from Trump's hometown of Palm Beach, Florida, who is in prison after being convicted on dozens of counts of health care fraud.

Tucker Carlson: "Pardoning Lil Wayne? Pardoning some medicare fraud criminal from Florida? Don't degrade yourself on the way out, defend the Bill of Rights." https://t.co/oxxjoX98me