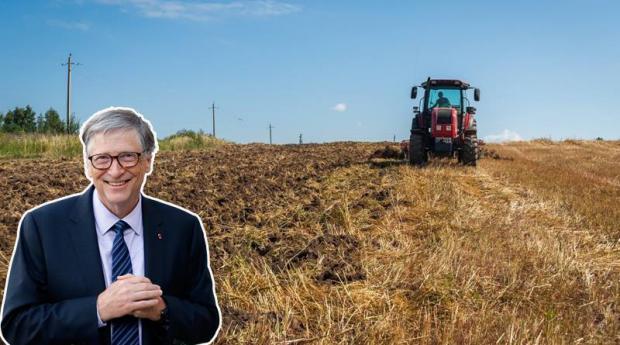 Bill Gates, the billionaire founder of Microsoft, has been revealed as the biggest private owner of farmland in the US, after buying up 242,000 acres in 18 states.

The tech mogul, who is the fourth richest person in the world with a net worth of $121billion, according to Forbes, has quietly built up a massive agriculture portfolio.

But even with his big new agricultural holdings, Gates still doesn't rank in the Top 100 of private landowners overall in the U.S. - when considering owners of land of all types, not just agricultural.

The title for largest landholdings overall goes to US businessman John Malone, chairman of Liberty Media, who owns 2.2million acres.

It is unclear why Gates, better known as a self-confessed computing 'nerd', has invested in farmland so heavily, and details of the land are scarce, as revealed in The Land Report.

The acquisitions are held directly, as well as through Gates' personal investment entity, Cascade Investments.

In 1994 Bill and Melinda Gates are said to have hired Michael Larson to help them diversify their property portfolio.

A 2014 Wall Street Journal profile of Larson, Cascade's chief investment officer, hinted at the beginning of that portfolio, after the piece noted that the firm owns 'at least 100,000 acres of farmland in California, Illinois, Iowa, Louisiana and other states — or an area seven times bigger than Manhattan.'

This City Created the Largest Free Food Forest in the Country...