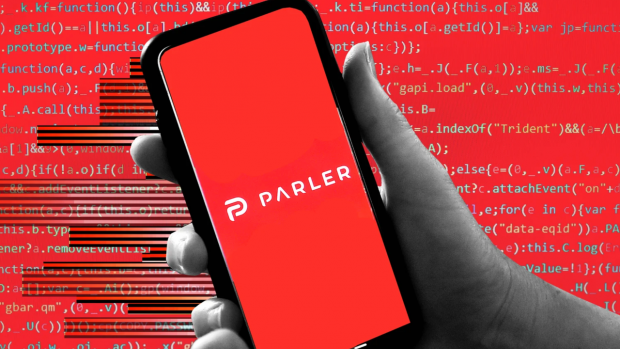 GPS tracking data obtained through a hack of the suspended Parler shows that many users of the social media app stormed into the US Capitol Building and posted about it during the riot.

Many of the thousands of supporters of President Trump who stormed the Capitol in last week's riots have since have been identified as users of the app which had billed itself as a 'free speech' alternative to Twitter.

The app has since been blocked by Google and Apple, and vanished from the web on Monday when Amazon pulled its web hosting services because Parler did not do enough to stop 'incitements to violence'.

Using the data, technology news website Gizmodo mapped almost 70,000 geo-located Parler video posts, finding hundreds published on January 6 from near or even inside the Capitol. Researcher Kyle Mcdonald also created a map of the posts nationwide.

Hailed by Donald Trump supporters as a conservative-friendly alternative to Twitter - which permanently suspended the president on Friday - the site was a magnet for die-hard Trump supporters who believe discredited claims that the election was 'stolen' through fraud.

Before it was removed, a hacker archived all of Parler's deleted posts, saying they provide 'very incriminating' evidence in the wake of the attack at the US Capitol.