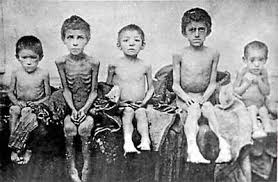 The Holodomor (Ukrainian: ??????????, romanized: Holodomór;[2] derived from ?????? ???????, moryty holodom, 'to kill by starvation'),[a][3][4][5] also known as the Terror-Famine[6][7][8] and sometimes referred to as the Great Famine,[9] was a famine in Soviet Ukraine from 1932 to 1933 that killed millions of Ukrainians. The term Holodomor emphasises the famine's man-made and intentional aspects such as rejection of outside aid, confiscation of all household foodstuffs and restriction of population movement. As part of the wider Soviet famine of 1932–33 which affected the major grain-producing areas of the country, millions of inhabitants of Ukraine, the majority of whom were ethnic Ukrainians, died of starvation in a peacetime catastrophe unprecedented in the history of Ukraine.[10] Since 2006, the Holodomor has been recognized by Ukraine[11] and 15 other countries as a genocide of the Ukrainian people carried out by the Soviet government.[12]

Early estimates of the death toll by scholars and government officials varied greatly.[13] According to higher estimates, up to 12 million[14] ethnic Ukrainians were said to have perished as a result of the famine. A United Nations joint statement signed by 25 countries in 2003 declared that 7–10 million perished.[15] Research has since narrowed the estimates to between 3.3[16] and 7.5[17] million. According to the findings of the Court of Appeal of Kyiv in 2010, the demographic losses due to the famine amounted to 10 million, with 3.9 million direct famine deaths, and a further 6.1 million birth deficits.[18]

Whether the Holodomor was genocide is still the subject of academic debate, as are the causes of the famine and intentionality of the deaths.[19][20][21] Some scholars believe that the famine was planned by Joseph Stalin to eliminate a Ukrainian independence movement.[10][22]