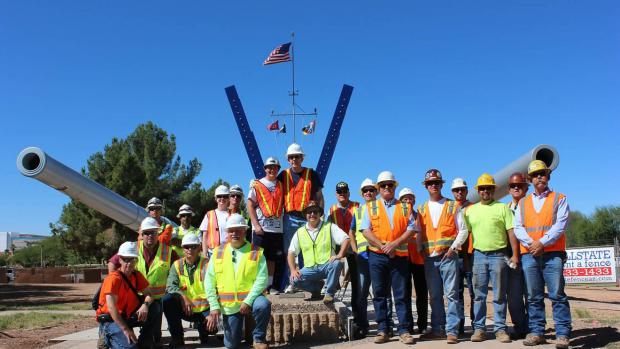 The memorial "Guns to Salute the Fallen," dedicated in 2013 at Wesley Bolin Memorial Plaza at the Arizona State Capitol, honors the service members at Pearl Harbor and all World War II veterans.

The nation's entry into World War II began with the attack on Pearl Harbor and ended in Tokyo Bay. Two battleships, the USS Arizona and USS Missouri, are indelibly linked to each event. Architect Rich Pawelko designed the privately funded memorial using artifacts from these ships.

Two large naval guns were placed near the USS Arizona's anchor and mast, which were previously on display in the plaza. One was used on the USS Arizona, a 30,000-ton battleship commissioned in 1916 and sunk at Pearl Harbor. The second was used on the USS Missouri, a 57,000-ton battleship commissioned in 1944, on whose deck the Japanese surrendered on Sept. 2, 1945.

The gun barrels are 405 inches apart, with each inch representing 1,000 American lives lost in World War II. Between the gun barrels are nine blue steel pillars that represent the nine minutes it took the USS Arizona to sink. The pillars emerge from the ground and bow out of the top, like the hull of a ship.

A truck hauls the USS Arizona's 14-inch gun at the memorial at Wesley Bolin Memorial Plaza at the Arizona State Capitol.

Can Your Own Convenience Meals - White Chicken Chili

Why Has The Fed Unleashed A Whirlwind of Inflation?

Send Us A Farm And We Will Pay You CA$H!