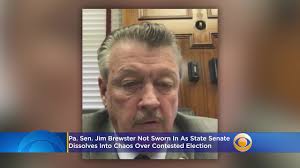 Pennsylvania lawmakers returned to the Capitol on Tuesday to be sworn in for the two-year legislative term, facing a still-raging pandemic and a dispute over seating a Democratic senator, with Republicans holding large majorities in both chambers.

The Senate quickly dissolved into chaos.

Democrats in the Senate began protesting — in some cases, shouting — after the Republican majority refused to seat Sen. Jim Brewster of Allegheny County, a Democrat whose election was certified by the state but is being contested by his Republican challenger, Nicole Ziccarelli.

Republicans then voted on a motion to remove Lt. Gov. John Fetterman, a Democrat, as the presiding officer, after Fetterman insisted that Brewster be seated with the other senators. They then voted through another motion to recognize the election in every Senate contest, except for Brewster's.

Republicans have not said how long they will take to review Ziccarelli's election challenge before voting on it, or how long the GOP majority is willing to leave the seat vacant. The open seat does not affect the balance of power in the Senate, where Republicans hold 28 of 50 seats.