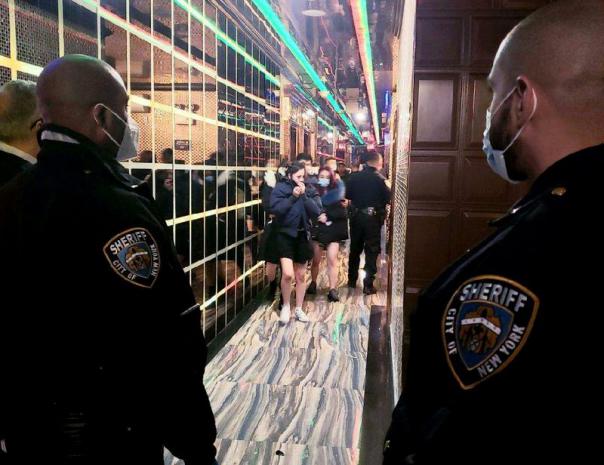 Authorities got word of the New Year's Eve bash at an industrial space on 58th St. near 55th Drive on Thursday night.

When they rolled up to the location around 2 a.m. Friday, they spotted about 25 people going in and out of the building's emergency exit.

Sheriffs found that the door was locked and could only be opened by an employee inside.

None of the 300 people inside were wearing face masks as they sang and danced the night away, officials said.

Party planners Man Phan, 37, his wife He Bin Wang, 37, D.J. Guowei Lin, 44, and a 35-year-old employee were all issued violations for running an unlicensed bottle club, failing to protect health and safety and violating the city's social distancing rules — all which could lead to $15,000 in fines.

An hour earlier, sheriffs busted a party inside a SoHo event space on Prince St. near Thompson St. with 145 revelers inside.

Cuomo chokes up as he apologizes over sexual harassment claims but says he will NOT resign...