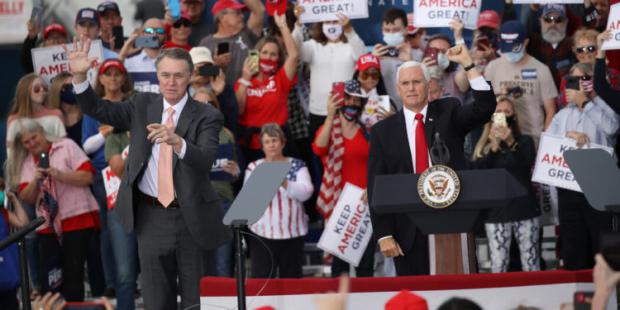 With Mr. Trump set to campaign for the two Republican incumbents, David Perdue and Kelly Loeffler, on Saturday, Vice President Mike Pence and former President Barack Obama held dueling events to underscore the vital stakes in the special elections: If both Republicans are defeated, control of the Senate will shift to Democrats just as Mr. Biden moves into the Oval Office.

Mr. Obama appeared virtually at a turn-out-the-vote event for Jon Ossoff, the Democrat facing Mr. Perdue, and the Rev. Raphael Warnock, Ms. Loeffler's opponent, and spoke of his frustration in seeing his initiatives blocked by the Republican-controlled Senate when he was in office. "If the Senate is controlled by Republicans who are interested in obstruction and gridlock, rather than progress and helping people, they can block just about anything," Mr. Obama said.

Mr. Pence — with Mr. Perdue and Ms. Loeffler by his side — attended a Covid-19 briefing at the Atlanta headquarters of the Centers for Disease Control and Prevention and said later at a rally for the Republican candidates that "we're going to save the Senate, and then we're going to save America."