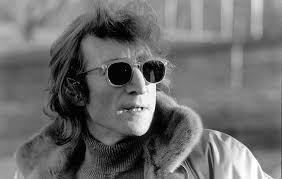 Even for a famous presenter on BBC Radio 1 who had interviewed countless household names, a meeting with one of the most famous musicians on the planet promised to be a thrilling exclusive.

Yet little did Andy Peebles know that his audience with John Lennon — the former Beatle's first interview in a decade — was fated to become the most important obituary in the history of pop music.

Just two days after they met in December 1980, and while Andy was on his flight back to London, Lennon was gunned down in cold blood by Mark Chapman outside his New York apartment block.

This Tuesday it will be 40 years since that appalling event generated instant news-flashes and headlines worldwide.

It was only when his plane landed at Heathrow that Andy learnt of the tragedy.

Still in shock, he found himself delivering live tributes on radio and television, for domestic and foreign media, as the last British journalist to have seen Lennon before he died. But far from it being a career-defining moment, the John Lennon interview took Andy to the brink of breakdown.

'I lost all sense of self-worth in the aftermath,' he admits to me. '... It blighted my life, and stunted me... The obsession nearly drove me mad. I tormented myself with survivor's guilt... He was the creator of some of the most brilliant music of the 20th century and will never be forgotten. I was nobody.'