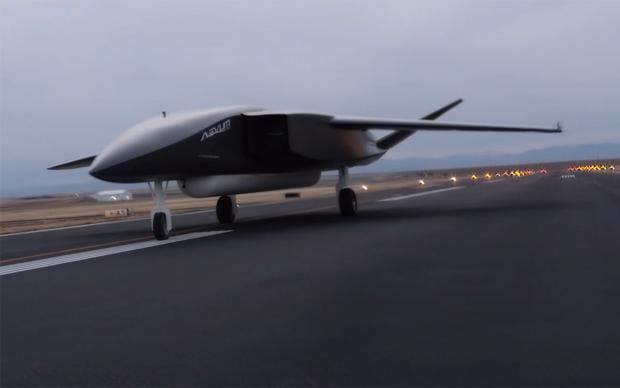 The world's first satellite launching drone, developed by a US-based space startup, will will be able to carry a new payload into orbit every 180 minutes, the firm claims.

Aevum says the massive 80ft long drone, named the Ravn X, is fully autonomous, 70 per cent reusable, and can take off and land on runways as short as a mile long.

Working in partnership with the US Space Force, the firm says it is 'completely reimagining access to space' by focusing on autonomy and better logistics.

The drone can take off from any runway to reach high altitude where it deploys a second stage that takes a small payload the rest of the way to space.

After it has launched the second stage rocket into low Earth orbit, the drone flies itself back to its home runway, lands and then parks up in its hanger.

The first launch of a satellite using the Ravn X is expected to be the US Space Force ASLON-45 small satellite launch mission in 2021.

The technology allows for satellites to be sent into orbit without a pilot, launchpad or massive rocket, which Aevum says removes the 'risk to human life'.

The drone is about as long as two school buses - about 80ft - and can carry satellites weighing up to 500kg fully autonomously with no costly infrastructure.

'We are pushing logistics to the next generation with software and automation technologies,' said Jay Skylus, founder and CEO of Aevum.

Military and US officials have said there is a 'critical need' for extremely fast access to low Earth orbit, Skylus said, so they set out to create a system 'faster than anybody'.