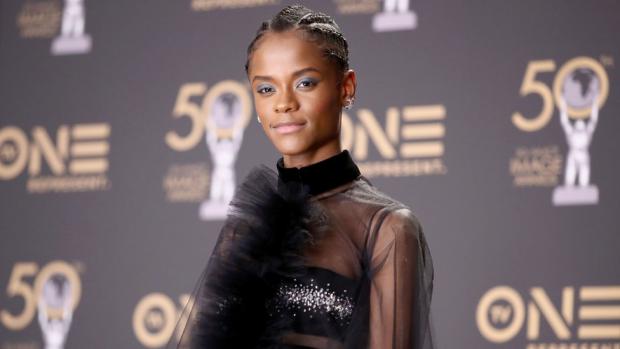 Black Panther star Letitia Wright has doubled down on her anti-vaccine views after sharing a video by a 'prophet' who asked if the injection will implant 5G antennas inside people or create human-animal 'chimeras'.

The British actress was slammed by her Marvel co-star Don Cheadle on Thursday night after she posted the YouTube clip that questioned the efficacy of the Covid jab.

She posted the link to UK Youtuber Tomi Arayomi's post called 'COVID-19 VACCINE, SHOULD WE TAKE IT?' next to a prayer hand emoji.

Arayomi is a Christian who claims to converse with angels and runs a ministry that charges members for lessons at his 'school', and describes himself as 'a well recognised Prophet and the Managing Director of Prophetic Voice TV'.

Wright's post sparked a fierce backlash with many asking Cheadle to call out 27-year-old Wright for posting the video . The actor called the footage shared by Wright 'hot garbage' and said what was claimed in it was 'F****d up'.

Wright doubled down today, saying she did not mean to offend people but wanted to raise her fears about what goes into vaccines.

She wrote on Twitter: 'My intention was not to hurt anyone, my ONLY intention of posting the video was it raised my concerns with what the vaccine contains and what we are putting in our bodies. Nothing else.'

The actress grew up in London and has starred in a string of movies including Avengers: Infinity War and 2019 Avengers: Endgame.

Star Wars actor John Boyega describes her as a close friend and People magazine yesterday published a joint interview with the two, but he has yet to comment on the episode.