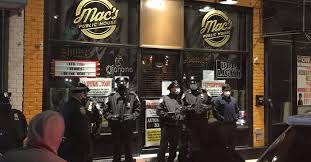 The tavern is in an area designated by Gov. Andrew Cuomo as an orange zone because of spiking COVID-19 rates and was not supposed to be serving customers indoors. But the owners had declared the bar an "autonomous zone," a nod to protesters who claimed control over a Seattle neighborhood in June.

The bar has been fined thousands of dollars as it continued to serve patrons inside and to operate past the 10 p.m. curfew for restaurant service that Cuomo imposed citywide.

According to a release from Sheriff Joseph Fucito, plainclothes deputies went inside Tuesday and ordered food in exchange for a mandatory $40 "donation." Uniformed deputies went in then and issued tickets for state and city violations.

Presti, 34, was uncooperative and was charged with obstruction of governmental administration in addition to the charges stemming from unauthorized food and beverage service, the sheriff said.