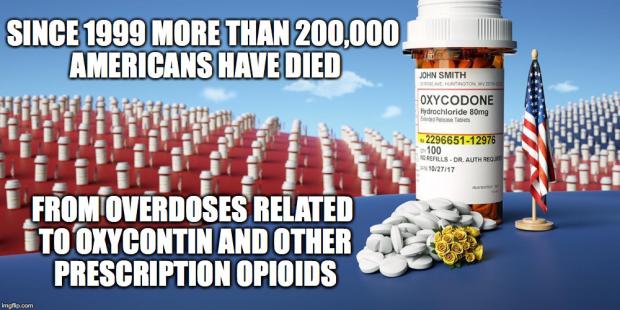 (Natural News) Court documents released last week under Purdue Pharma's bankruptcy process reveal that that consultancy firm McKinsey & Company advised its client to pay rebates to distributors of OxyContin whenever an overdose case could be traced back to abuse of the controversial opioid pill.

The purpose of these kickbacks or bonuses was to help "turbocharge" Purdue's sales of the deadly drug, thus producing higher profits for the pharmaceutical giant amid escalating scrutiny over its illicit marketing and sales practices.

Though the Trump administration reportedly cut a deal with the Sackler family, which runs Purdue, to protect them from criminal liability, the company has reportedly agreed to plead guilty to criminal charges over the way it peddled OxyContin to the masses.

In a 2017 presentation, McKinsey advised Purdue to compensate distributors of OxyContin for the damage associated with their selling of the drug in order to help boost sales. These distributors include the pharmacy chain CVS Health and Anthem, which are two of McKinsey's biggest clients.

McKinsey came up with estimates for how many people would likely overdose or get hooked on OxyContin, advising Purdue to pay rebates for these "events" in order to still continue raking in windfall profits from the drug's illicit sale.

Each of the 2,484 cases of overdose or addiction from OxyContin that were traced through these respective distributors were reportedly to be paid $14,810 per case, netting the distributors $36.8 million in kickbacks. However, CVS and Anthem both claim that they never actually received these "rebates."

Millions of Americans had their lives destroyed because of Purdue, McKinsey and the Sackler family

To try to cover their tracks, McKinsey's senior partners discussed one year later the importance of "eliminating all our documents and emails." This suggestion was made after the state of Massachusetts filed a lawsuit against a former Purdue board member for the role she played in fueling the opioid crisis.

"Thank for the heads up. Will do," responded Arnab Ghatak to an email from McKinsey's North American pharmaceutical practice leader Martin Elling advising the destruction of evidence.