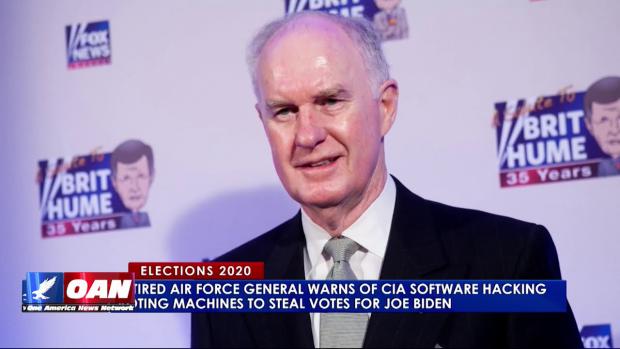 These are both three star Lieutenant Generals, effectively endorsing each other and Trump and suggesting CIA involvement, foreign interference, and talking of crack US soldiers seizing servers in Germany that were controlled by the CIA.

The implications are that there are sections of US intelligence on opposite sides of the battle. This might explain why, at one point, Sidney Powell said she wasn't sure if the good guys or the bad guys had the servers in Germany. (The good guys apparently got the servers in the end, but possibly at the highest price, and we wait to find out what, if anything, was on them).

Not many in the US would know more about intelligence operations than Michael Flynn — the 18th Director of the Defense Intelligence Agency (DIA) under Obama and the National Security Adviser under Trump.  Thomas G. McInerney is a retired United States Air Force Lieutenant General who flew in 407 combat missions during the Vietnam War. He was also Assistant Vice Chief of Staff of the US Air Force.

"We've never seen treason of this magnitude ever in our history" declared McInerney. "Trump must not let deadlines stop him fulfilling his oath to defend the country against all enemies, both foreign and domestic".

In this strange election twilight zone, there is no easy way to verify much. In a normal world (the one we thought we lived in six weeks ago) we'd expect the media to put this sort of thing on the front page. In a normal world, if the BBC didn't mention it, perhaps it didn't happen. But the normal world hasn't been normal for years.  Gradually more things became Undiscussed — like cold snaps and scientists hiding declines. But, now the censorship fog has arrived like a Brown Dwarf snuck up on the solar system.

Keep your skeptical hat on. It sounds like a Tom Clancy thriller. It would make a great movie. And both sides have an interest in a Big Bluff.