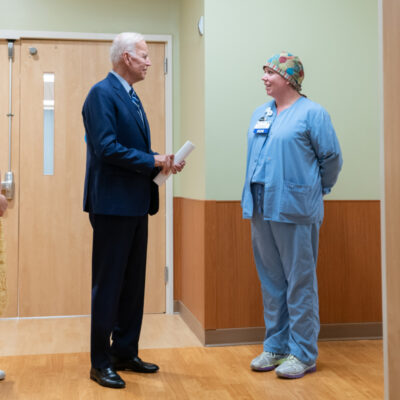 "Get well soon!" the president tweeted.

The 78-year-old Biden suffered the fall on Saturday while playing with his dog, Major, and broke his foot. He visited an orthopedist in Newark, Delaware, on Sunday afternoon, his office said. He will wear a walking boot for the next several weeks as he recovers, his doctor said.

"Initial x-rays did not show any obvious fracture," but medical staff ordered a more detailed CT scan, his doctor, Kevin O'Connor, said in a statement. The subsequent scan found tiny fractures of two small bones in the middle of his right foot, O'Connor said.

"It is anticipated that he will likely require a walking boot for several weeks," O'Connor said.

Fractures are a concern generally as people age, but Biden's appears to be a relatively mild one based on his doctor's statement and the planned treatment. At 78 he will become the oldest president when he's inaugurated in January; he often dismissed questions about his age during the campaign.