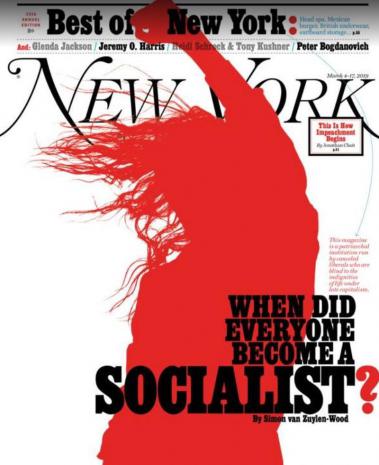 Roughly 18 months have passed since New York Magazine published a cover story declaring that, in the age of President Trump, all the new "it" kids in Brooklyn (we use the term "kids" loosely; most are well into their 30s) are avowed socialists.

As the reporter explains, the new generation of Brooklyn cool kids have blue check marks on twitter and low-paying editorial jobs at digital magazines like the (now defunct) Outline, Deadspin (a media outlet ostensibly dedicated to sports but realistically covered whatever its reporters and editors felt like writing about on any given day) or Jacobin, a magazine that has been described by some as "straight up Marxist" in its editorial slant. Almost all of them were white women, the most oppressed class.

One year later, a staff uprising at the NYT exposed just how deeply embedded these new crypto-marxist values have become in the modern American media environment. Staffers successfully ousted Opinion Page editor James Bennett over his decision to curate an essay from Republican Sen. Tom Cotton despite the fact that the opinion page is supposed to be an entirely separate editorial entity from the NYT's newsgathering operation.

This week, the NYT has published a story about a handful of wealthy heirs who have embraced the socialist credo, and who see their massive piles of inherited wealth as a symbol of shame, not a blessing for which they should be extremely grateful.

Take 25-year-old Sam Jacobs, for example. Described as "a socialist since college", he reportedly sees his family's "'extreme plutocratic wealth' as both a moral and economic failure".

"I want to build a world where someone like me, a young person who controls tens of millions of dollars, is impossible," he said.