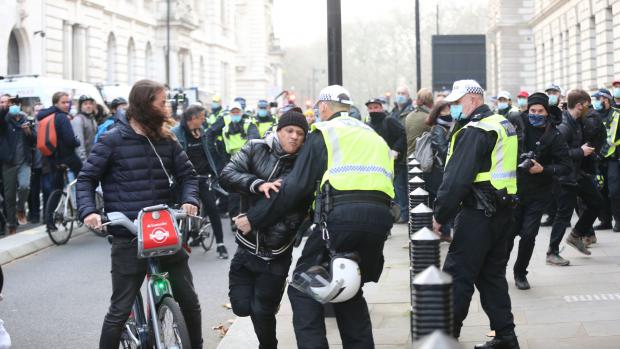 Large anti-lockdown protests are sweeping across Europe. Denmark, France, Germany, Italy, the UK, Poland. The media are trying to put a lid on coverage of these momentous events.

In a more intimate setting, up close and powerfully personal, gym members and owners in Buffalo, New York, shouted down cops and a public health officer, who had entered the gym because the gathering exceeded the prescribed limit. The gym personnel drove out the cops and followed them, to make sure they left the property.

In Buffalo, protestors came to the house of Erie County Executive, Mark Poloncarz, to express their anger at new lockdown restrictions. The protest was also aimed at New York Governor Andrew Cuomo.

Sheriffs in Fulton and Erie Counties (New York) are refusing to enforce Thanksgiving lockdowns which limit the number of people in private homes.

In various areas of England, police have warned government officials they're "sitting on a time bomb," because lockdown rules make it illegal for two or more families to gather together for Christmas—and law-enforcement personnel are permitted to invade homes where violations are occurring. The time bomb is, of course, huge numbers of outraged citizens.