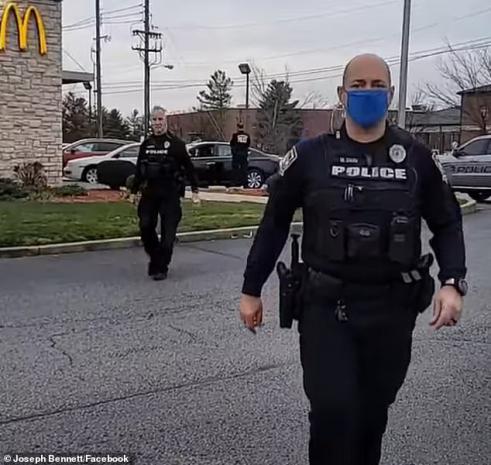 A man who was filming an arrest on Facebook Live was confronted by police officers and allegedly punched before being arrested himself in Jeffersontown, Kentucky.

Joe Bennett claims he was hit 'with a solid left hook' by the officer after he began recording a livestream on Tuesday when he saw five police cars swarming around a suspect, which he deemed to be excessive.

For most of the video, Bennett narrates while standing at a distance next to a McDonald's, approximately 50 feet away from the police action according to the New York Post.

At various points in the video, he even makes mention of his own desire to avoid getting caught up in the incident, claiming he was not 'looking for a problem' and was 'trying to stay away so I don't get involved.'

'This might be the most boring live video ever,' Bennett says at one point.

About three minutes into the stream, however, at least one officer becomes aware of the fact that they are being recorded, with two officers quickly approaching Bennett.

'You're filming a crime scene investigation…and you're involved,' one officer says to Bennett while asking him to produce identification.

When Bennett defends his actions, there is a clear scuffle over the phone, with the video continuing to show a physical confrontation for several seconds before the livestream ends.

Police claim an officer was forced to hit Bennett with an 'empty strike' during the arrest.

Bennett, on the other hand, claims that he was hit with a 'solid left hook' and needed medical treatment in the immediate aftermath of the incident.