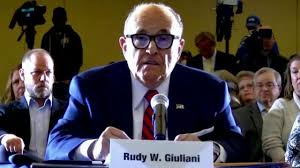 The Pennsylvania state legislature on Wednesday held a hearing on the 2020 election issues and irregularities.

One very credible witness described how he personally observed dozens of USB cards being uploaded to voting machines which resulted in 50,000 votes for Joe Biden in a short period of time.

The witness introduced himself: "My name is Gregory Strenstrom, I am from Delaware county, former Commanding Officer in the Navy, veteran of foreign wars, CEO of my own private company, a data scientist & forensic computer scientist & an expert in security and fraud."

"I was told that every election they leave a couple of USBs in the voting machines…after talking to law enforcement I found out that was not the case, that more than two [USBs] is unusual — so, they denied they did it but as of today, 47 USB cards are missing and they're no where to be found…so I was told personally that these cards that were uploaded…they didn't update the vote live in real time," Strenstrom said.