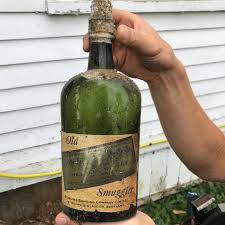 A couple has been left stunned after finding 66 bottles of Prohibition-era whiskey hidden in the walls and floorboards of their upstate New York home.

Nick Drummond and Patrick Bakker purchased the property in the town of Ames late last year, and were told it once belonged to a 'childless German baron who turned to bootlegging in the 1920s'.

The pair passed off the story as nothing more than folklore until they began renovating the 105-year-old residence last month, and discovered concealed liquor in the spaces between the walls and floors.

Drummond told CNN that he was removing outside skirting from a mudroom when he found the bottles of whiskey wrapped up in brown paper.

'I'm like what is that? I'm was very confused... I'm like holy crap. This is like a whiskey stash. And this is like, all of a sudden, the whole story of the bootlegger [makes sense].'

Drummond shared video of the remarkable moment to his Instagram page - which has recently attracted thousands of new followers.

'OUR WALLS ARE BUILT OF BOOZE!' he wrote.

The U.S. of A-Bomb: How American Nuclear Weapons Changed the Course of Human History

When Will Christians Again Make Their Appeal To Heaven?