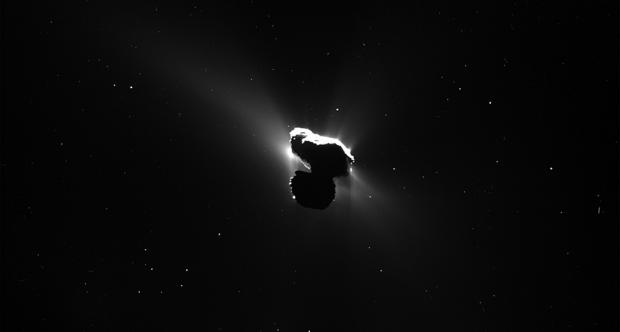 The discovery was made in data from comet 67P/Churyumov-Gerasimenko by the Rosetta probe a few years ago, strengthening the idea that life's ingredients were delivered to Earth by comets.

Six chemical elements make up almost all biological molecules on Earth: carbon, hydrogen, nitrogen, oxygen, phosphorus and sulfur (CHNOPS). How our home planet managed to become so bountiful in all of them has long been a mystery, but one of the leading hypotheses is that they were brought here long ago by comets, asteroids, and impacts with proto-planets.

The first four are simple enough – they're the main ingredients of carbonaceous asteroids, the most common type of space rock in our neighborhood. Sulfur turned up during a chemical analysis of comet 67P's gassy coma, which according to ESA would give it a pungent rotten egg smell.

That left just phosphorus. Previous studies have suggested that this element, crucial for making the compound that our cells use to store and transfer energy, is relatively rare across the universe. And without it, life may not emerge very easily.

Now, the stuff has finally been found on a comet. A new study, led by the University of Turku in Finland, made the discovery by analyzing data from the Cometary Secondary Ion Mass Analyzer (COSIMA) instrument onboard Rosetta. The instrument collected dust particles from the coma of comet 67P, photographed them, and measured them using a mass spectrometer.

Well, what can you expect? You are going to find many elements and compounds all over the universe. The second day of creation, God separated the waters, placing the sky between them = waters under the sky and waters above the sky. Before that, all the material in the universe was the Earth. So, you will find all the elements out there all over the place. It doesn't have anything to do with finding life out there.