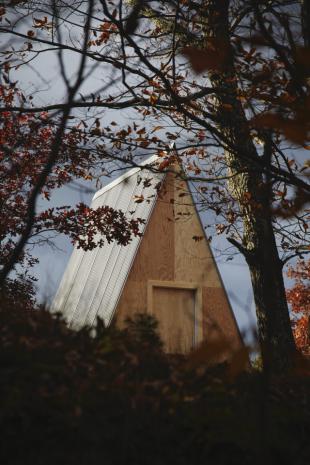 Costing $21,000, the kit is claimed very easy to build over two or three days.

Though we've reported on hardcore tiny house enthusiasts who have lived in even smaller homes, the Den Cabin Kit is definitely intended as a simple retreat and contains no toilet or running water, for example, so it would be a good fit as guest bedroom, holiday rental, overnight retreat or similar. One can't help but notice that high cost so we quizzed Den Outdoors on its pricing and the firm says that its kit stands out from others on the market as it has been carefully designed from the ground-up to be as easy to build as possible.

"Unlike other cabin kits out there that are just pre-cut dimensional lumber packed alongside some basic construction materials, the Den Cabin Kit goes miles further," Den Outdoors founder Mike Romanowicz told us over email. "Under the hood, we have components that are cut with CNC precision, a design that slots together intuitively, and a kit so complete even the door hardware is included so you won't need to make any trips to the hardware store.

"The cabin bolts and screws together and all the holes are pre-drilled making for fast assembly. There are no nails in the construction so you could take it down if you wanted to and move it if the first place you picked wasn't the right spot. Even though it's 'semi-permanent' in this regard it's no less a building and can withstand the harshest elements, with four season compatibility. It comes flat packed on a truck for you to immediately begin, and our team even packs all the materials in the order you need them in your build. Just take from the top of the stack and go."