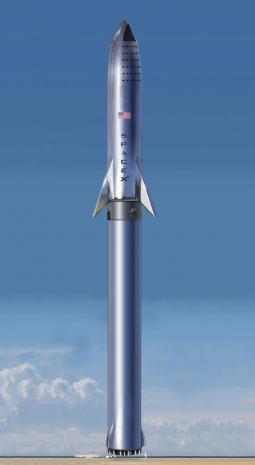 The upgraded for the Ultra Heavy Starship 2.0 might be able to launch over 1000 tons per launch.

The smallest project Orion design was about 17 meters in diameter and weighed 300 tons. This was called satellite Orion.

This means a Ultra Heavy Starship version 2 would have the payload diameter and cargo capacity to launch a complete satellite Orion. The parts for 4000 ton interplanetary Orion could be placed into Orbit with about four launches.

Freeman Dyson considered an alternative momentum limited pusher plate design where an ablation coating of the exposed surface is substituted to get rid of the excess heat. The limitation is then set by the capacity of shock absorbers to transfer momentum from the impulsively accelerated pusher plate to the smoothly accelerated vehicle. Dyson calculated that the properties of available materials limited the velocity transferred by each explosion to ~30 meters per second independent of the size and nature of the explosion. If the vehicle is to be accelerated at 1 Earth gravity (9.81 m/s2) with this velocity transfer, then the pulse rate is one explosion every three seconds.