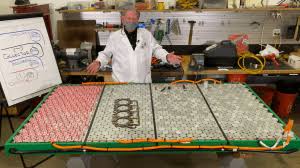 We can only imagine Sandy Munro is practically drooling as he thinks about the future. There's been a bit of a lull in terms of fascinating new electric cars and EV-related tech launches. However, the flood gates are about to open next year, and in a very big way.

The Tesla Cybertruck is coming to market, along with the GMC Hummer EV, and the Rivian R1T electric pickup truck. Let's not forget other upcoming EV wonders, including the Tesla Model S Plaid, the Ford Mustang Mach-E, and some of the first makings of Tesla's Battery Day announcements.

We know Tesla is already testing 4680 cells in cars. We also know that it's already making the batteries, and Panasonic plans to make them, too. In addition, Tesla will eventually move from its standard skateboard-style battery pack to a new structural pack.

With that said, when the first Tesla vehicles become available with 4680 cells, they will almost certainly be in a "normal" Tesla battery pack. Sandy Munro arguably knows more than anyone (aside from the folks at Tesla) about Tesla's battery packs. So, he decided to use the information from his teardowns, as well as what we know so far, to build us a 4680 battery cell mock-up.

Munro compares the 2170 cell to the 4680 cell. He also looks at the entire battery system to show us how it all works. There's a whole lot to take in here, so carve out about 15 minutes and give it a watch. Then, as always, leave us your takeaways in the comment section below.