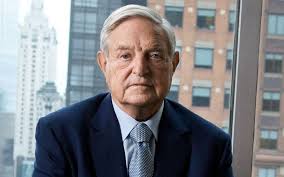 I mean, I had heard of him. He was a zillionaire investor who made a fortune in the stock market, a weird corner of the universe I've long accepted I'll never understand. (Roulette seems a much more honest way to gamble, but not everyone agrees.) Anyway, for some reason this particular zillionaire was one who made people very upset. From the far left, there existed the natural distrust of anyone with so much money, but from the conspiracy-primed right came intimations of a nefarious global puppet-master. Soros was Jewish, so the accusations felt like an old, familiar tune, yet there were others who called him a Nazi collaborator. Something was clearly unusual about this guy.

So, like I said, I hit Wikipedia. And though I only skimmed it, I learned more from that quick glance than I did watching the just-released documentary feature "Soros."

The film is screening in theaters in select cites and virtual cinemas starting November 20.

Directed by Jesse Dylan (Bob's son), this portrait of the 90-year-old Hungarian-born billionaire is not, in any way, a "real" film. It feels like one of those videos they make you watch before you look at a time share. It is an 86-minute advertisement for just how great George Soros is, and an intensely boring 86 minutes at that.