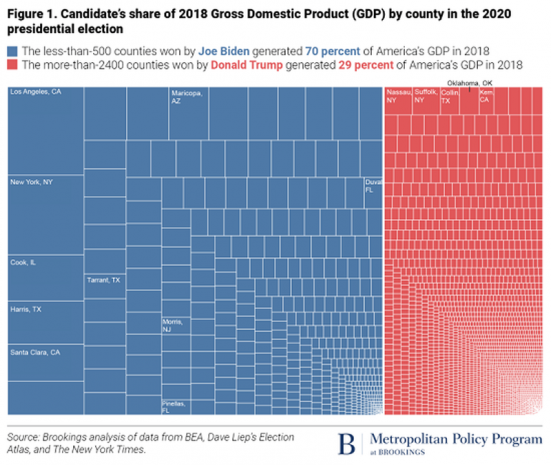 There's one chart that predicts our future, and no, it's not related to Covid--it's related to capital, specifically the concentration of capital and power in the hands of the few at the expense of the many.

70% of America's economy is generated in fewer that 500 counties; the other 2,500 counties are left with the remaining 30%. The nation's productive capital is even more concentrated in a few hands and regions, and since income and political power flow to capital, the financial disparity / inequality far exceed the 70/30 split depicted in this political map.

Ownership of capital is concentrated in the hands of the top 10%, as the chart of equity ownership reveals, but the concentration is actually much more limited: the top 0.1% control so much wealth / capital that they "own" virtually all the power.

I hope it's not a big surprise that America is now a rigidly two-tier society and economy. If you're an executive at a big Wall Street investment bank, you can rig markets and embezzle billions and you'll never face any personal legal consequences such as being indicted for fraud and being imprisoned.

But try being an employee at a local credit union and embezzle $5,000--a prison sentence is very predictable.

If you're one of the 500,000+ people busted for possessing cannabis in the U.S. every year, then you're not rich and powerful, because when the spoiled-rotten child of the rich and powerful gets busted, the charges are quietly dropped, or cut to a modest fine and a misdemeanor, etc.