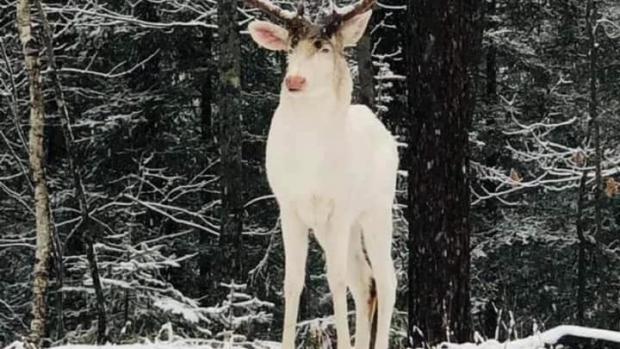 A Wisconsin woman stumbled upon a spectacular albino buck in her backyard and snapped a pair of now-viral photos.

Tracy Weese was peering across the snow-covered backyard of her Boulder Junction, Wisconsin, home when the remarkable deer strutted by.

'His Majesty just strolled through our backyard,' Weese wrote on Facebook, where she shared two photos of the animal.

A photo was later shared by the Vilas County Sherriff's Office, which called the albino buck 'an incredible sight to see.'

The photos have garnered more than 8,000 shares since they were posted on Monday, with many commenters calling the deer 'majestic' and 'stunning.'

Weese clarified that the deer was albino and not a piebald. Piebald or pied animals have a pattern of unpigmented spots on a pigmented background of hair, feathers or scales.

She added that the brown spotted on the deer's head was 'from him rubbing his antlers and head on trees when shedding his white velvet.

'The brown stain on his leg is his tarsal gland releasing his scent as he's in rut. He looks different right now due to rut.' Rut refers to the deer mating season.

It's unclear how large the albino deer is, but the average deer measures from six to seven feet and can weigh as much as 300lbs.