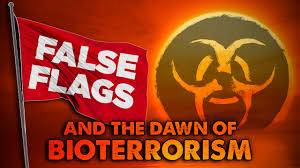 For the past twenty years, the world has been in the midst of a so-called "war on terror" set in motion by a false flag attack of spectacular proportions. Now the stage is being set for a new spectacular attack to usher in the next stage in that war on terror: the war on bioterrorism. But who are the real bioterrorists? And can we rely on government agencies, their appointed health authorities, and the corporate media to accurately identify those terrorists in the wake of the next spectacular terror attack?

A false flag operation is an action that is carried out in such a way as to make it look like it was done by someone other than the real perpetrator. Taking its metaphor from naval warfare, where ships would sometimes fly false flags as a ruse du guerre in order to sneak up on their enemy, its use has been expanded to include military actions, intelligence operations and even political subterfuge.

It is not difficult to see how governments can use this tactic to whip the public into war hysteria against their political enemies. By staging an attack and blaming their opponents, governments can dupe their population into going along with whatever policies they wish to enact in the name of "fighting the enemy." It's a childishly simple tactic but, as we shall see, it has worked for hundreds of years to lead populations into war against targeted groups.

For the past twenty years, the world has been in the midst of a so-called "war on terror" set in motion by a false flag attack of spectacular proportions. And now, the stage is being set for a new spectacular attack to usher in the next stage in that war on terror: the war on bioterrorism.

GATES: We can't predict when, but given the continual emergence of new pathogens, the increasing risk of a bioterror attack, and the ever-increasing connectedness of our world, there is a significant probability that a large and lethal modern-day pandemic will occur in our lifetime.

As the world begins to lose its collective mind over the threat of viruses, the idea that biological agents and infectious pathogens will be the weapon of choice of the terrorists is being seeded in the public imagination. As in every such false flag event, the coming bioterrorist attack will be blamed on a convenient scapegoat: the "invisible enemy" of a deadly new pathogen and the shadowy terror groups who, we will be told, are responsible for releasing it.

But, as history shows, it is the people who are claiming to "predict" this attack in advance, and who are in positions to dictate the world's response to it, who should be considered the prime suspects in the wake of any such event.

This is an exploration of False Flags and the Dawn of Bioterrorism.

You're tuned into The Corbett Report.

Although the term "false flag" has been used in a figurative sense since the 16th century to refer to some person or group disguising their true nature or intentions, its modern use derives from the annals of naval warfare, where ships would literally fly the flag of a different nation, pretending to be allies in order to slip past enemy defenses.

The ruse was successful enough that it was adopted for land and air warfare. No longer were literal flags necessary in order to carry out these "false flag" operations. Any use of deception in order to conceal the true origins and perpetrators of an attack could, by extension, be counted as a false flag operation.

It's a simple idea, but, to those not versed in the art of deceit, it can be devastatingly effective. Unsurprisingly, rulers have used the tactic for hundreds of years to rally their own populations for war against an enemy target.

Take the case of Swedish King Gustav III. In 1788 he was looking for a way to unite an increasingly divided nation and raise his own falling political fortunes. Like many a ruler before and after, he decided that launching a war against his old rivals, the Russians, would be the perfect vehicle for rallying the public around his government. But the king had a problem: there was no appetite among the Swedish public for such a war, and he didn't have the authority to declare war unilaterally. So he arranged a false flag operation. Gustav dressed up his own soldiers as Russian troops (complete with Russian coins in their pockets) and ordered them to attack a Swedish garrison stationed in Finland. The Swedish public, believing it to be a genuine Russian attack, were outraged, and the Russo-Swedish War of 1788-1790 began.

Or take the case of Seishir? Itagaki, a general in the Imperial Japanese Army who, by 1931, had risen through the ranks to become the Chief of Intelligence in the Kwantung Army, Japan's largest army group. Itagaki had a problem: he wanted to invade Manchuria, but the Japanese Minister of War wouldn't allow it. So the general took matters into his own hands by organizing a small cadre of rebels within the Japanese Army and launching a false flag attack. They detonated some explosives on a railway track near a Chinese garrison and blamed the incident on the Chinese themselves. The next day, the Japanese began their attack in response to the "Chinese" provocation and Itagaki got his Manchurian invasion.

Or take the case of the Manning memo. This document records the discussions that took place between US President George W. Bush and UK Prime Minister Tony Blair at the White House on January 31, 2003. They were committed to starting a war with Iraq, but they had a problem: they didn't have any actual reason for invading Iraq. As the memo reveals, Bush proposed a false flag solution: painting a U2 spy plane in United Nations colours and flying it low over Iraqi airspace in the hopes that it would be shot down by Iraqi air defense. The outrage, it was assumed, would give the leaders the blank check they needed to wage their war. Blair reportedly balked at the idea, but the pair did agree that the invasion would go ahead regardless of whether or not any weapons of mass destruction were ever found, war crimes be damned.

There are many such examples of false flag operations being used throughout history. But the tactic isn't an old, dusty relic of the distant past. It very much pertains to the world of the 21st century . . .

It seems inevitable, in hindsight, that the idea of a "false flag" attack would be adapted from its literal use in naval warfare to a more general tactic of deception in military engagements.  So it's not surprising at all, then, that the concept was further abstracted from a stratagem of warfare to a tool of spy craft.

With the rise of the age of terrorism came the rise of false flag terrorism: spectacular acts of violence designed to look like they were the acts of shadowy terror groups. Once again, the trick is simple but effective.

In the early 1950s, the Israelis were concerned that the British would withdraw their forces from the Suez Canal zone, strengthening Egyptian President Gamal Abdel Nasser and his quest to form an alliance against Israel based on Pan-Arab nationalism. Realizing that the only thing that would keep Britain committed to the region was an ongoing state of emergency, they hit upon a simple solution: a false flag terror operation.

Officially codenamed Operation Susannah (but today known as the Lavon Affair), Israeli military intelligence staged a number of bombings around Egypt, hoping to blame the acts on communists, the Muslim Brotherhood, malcontents, or other convenient scapegoats. But the plan was foiled by Egyptian authorities. Several members of the Israeli cell were captured and the Israeli defence minister was forced to resign over the incident. It was never officially admitted until 2005, when Israel formally honoured nine of the spies that had helped carry out the bombings.

But the era of false flag terrorism kicked off in earnest on September 11, 2001, when the neocons in the Bush administration and their accomplices in the military-industrial complex and the intelligence services of multiple countries found an excuse for their longed-for invasion of Afghanistan and the fulfillment of long-standing Zionist plans for carving out a Greater Israel and redrawing the map of the Middle East.