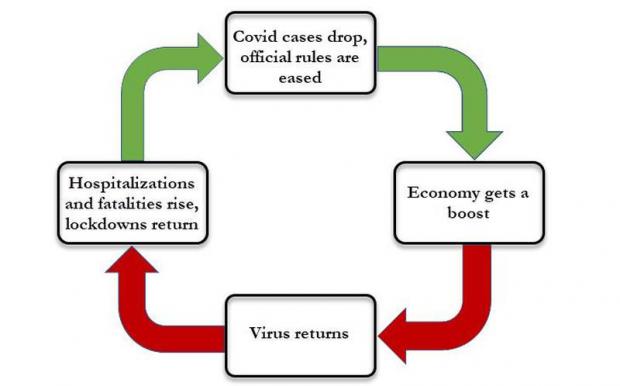 In the first of a three-part series published by Bank of America, the bank's global economist Ethan Harris looks at the theoretical feedback loops and trends linking the economy and coronavirus, focusing on how changes in consumer behavior resulting from the pandemic are impacting the economy.

Having analyzed "many countries and multiple episodes" of covid around the world, Harris has seen a "simple cycle in countries that have not contained the virus" which is as follows:

When COVID cases come down, both individual behavior and official rules are eased.

With a multi-week lag that boosts the economy.

However, it also allows the virus to come back.

Finally rising cases lead to rising hospitalizations with about a two week lag and that in turn leads to higher fatalities with another two week lag.

While at the top-level it really is that simple, and is why any partial future lockdowns are doomed to failure while a comprehensive, long-term lockdown would destroy the economy, BofA notes that on top of this cycle there are both positive and negative secular trends. On a positive note:

Learning by doing: people figure out how to function in a COVID world, without severe shutdowns. This happens over time as regions experience the virus surge first hand.

Super spreaders stop spreading: some people spread the virus a lot more than others, but they likely get the virus early on and are no longer spreaders.

Treatments improve: death rates are much lower than they were in the spring, although they stopped dropping in early August.

Protect the vulnerable: the virus is much more dangerous for old people and people with comorbidities. Better testing, tracing and quarantining of these groups has helped lower the death rate as well.